In 1917, Washington’s workforce swelled as never before due to the great numbers of people who came to work for the government supporting the WWI effort.  There was plenty of work for them to do, but a sad lack of services to provide them lunch and opportunities for recreation.  An unaffiliated group of vendors saw the need and banded together to provide cafeteria and vending services for these government workers; and so, in this inauspicious way, Guest Services came into being.

In 1926, under the leadership of Maj. General Ulysses S. Grant III, the organization was incorporated in the District of Columbia as the Welfare and Recreational Association of Public Buildings and Grounds.  Although not a government agency, its purpose was to feed federal workers at the numerous agency buildings, and to manage recreation facilities in the area, such as swimming pools and tennis courts, for the National Park Service.

In 1945, the company changed its name to Government Services, Inc. Also in that year, we received permission from the government to operate outside the confines of the District of Columbia, and we began to expand our horizons – first to North Carolina, where we operated a government-owned resort known as Fontana Village, and in later years to Washington state and California, where we operated national parks (we operate Mount Rainier National Park to this day).

Along the way, our sphere of influence widened to include operations in the private sector in addition to our government and National Park Service accounts. And so, in 1982, we changed our name from Government Services to Guest Services, Inc., to signify our abiding commitment to our customers and guests.

In 100 years Guest Services has evolved from an unincorporated group of vendors to one of the largest and most influential hospitality and recreation management companies in the United States. From managing food and recreation services in Washington, DC, we have grown to also become a force in the hotel and resort industry, and have brought our “legendary hospitality” to retail, condominium and senior living services management. Our reach is national; however, for the entirety of our first “Century of Service,” our focus is and always has been on our local clients and guests, wherever they may be.

As we move into our second century, our focus and commitment remain unchanged. Our clients, guests and employees are and will continue to be the reason we serve.

Major General Ulysses S. Grant, III (1881 – 1968), grandson of the Union general and U.S. President, was the founding leader of the company that would become Guest Services, Inc. 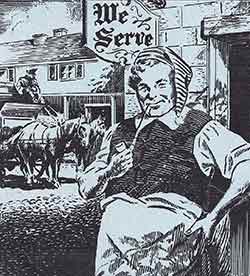