For more than 20 years the Bear Mountain Oktoberfest has delighted its crowds with authentic music, delicious themed festival foods, exciting activities, and spectacular Bear Mountain hikes and sightseeing. Unfortunately, the success of Oktoberfest at the Bear Mountain Inn was so great that it led to overpopulation, which started threatening the quality of the festival and the park. State officials saw that event traffic was overflowing and becoming disruptive, which resulted in their decision to move Oktoberfest from the grounds surrounding the Inn to another location.

A few miles down the road from Bear Mountain Inn, the Anthony Wayne Recreation Area is a vast wide-open field with an enormous amount of parking, and not much else. “If we were going to host Oktoberfest at this barren new location, we would need to bring in everything – storage, tents, chairs, stands, stages, signs, bars, fully equipped kitchens, and expanded staff. Again, we’d have to build everything,” says Alicia Diamond, managing director of Guest Services’ New York State Park Operations. 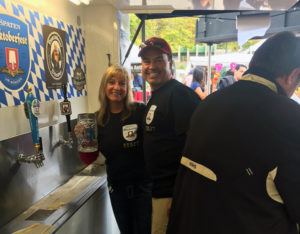 “At Bear Mountain, Hessian Lake served as a beautiful backdrop for Oktoberfest; there were plenty of hiking and sightseeing options, the Merry-Go-Round Pavilion, and the Bear Mountain Inn. We could easily solve virtually any problem when the event was held in our ‘backyard’ but the biggest challenge with the relocation of Oktoberfest was the lack of landmarks and activities at Anthony Wayne…and we couldn’t build a lake!” says Alicia. What Alicia and her team could do however was innovate. By addressing customer concerns and learning from past Oktoberfests, Alicia and her team eliminated the inefficiencies, implemented technology so they could begin accepting credit cards, added more taps, bartenders, and food carts to greatly reduce queues; and created a new family section, which made it fun for parents to bring their children. “We’re always looking for ways to improve and become more efficient. Next year we’re thinking about incorporating food trucks, which would allow us to cut down on the cost of renting mobile kitchens.”

A few silver linings of the Anthony Wayne Recreation Area include parking fees as a source of additional revenue, significantly more parking space, less overcrowding, and mitigation of the previously experienced traffic issue. An unexpected benefit was the broadening of demographics.

“The new area was more appealing to a younger set of guests. Many Bear Mountain advocates continue to return, which is a great success; and the expanded experience has attracted more millennials and city dwellers, which has resulted in a more active and adventurous crowd,” Alicia says. Escaping the concrete jungle Oktoberfests in New York City to the natural splendor of the state park has become a major point of interest for New Yorkers.

Although it’s taking some diehard fans of the “old” Oktoberfest awhile to adjust to the new location, the crowds at Anthony Wayne Recreation Area and the coinciding festival successes speak for themselves. The entirety of this operation was physically moved from one location to another, but through perseverance and innovation by our staff, Bear Mountain’s Oktoberfest is alive as never before.